I had just arrived from Frankfort, and I was tired of airports so I picked up some random bag that looked like it could be mine and then went out to find my Grandparents. After I found them of course I had to take a picture so they could show my parents of my safe arrival. After the picture Ii handed my bag to Papa and said," Here, this is more your luggage than it is mine." (Most of the stuff in my bag was stuff for the boat that Papa had ordered and had shipped to our house.)

So then we started the long bus ride from the airport to the harbor and of course the boat.

After we arrived on the boat we had decided since we were leaving the next day it might be a good idea to get some pork gyro's because we wouldn't find them anywhere else that we were going. After some delicious pork gyro's we went back to the boat and I crashed. Then I did something that I had never done before.  I woke up before anyone else did.  Now if any of you know me, that is like unnatural of me.  After waiting for 3 hours so my grandparents could get up as well as everyone else, we left the dock and said goodbye to civilization.

Now in Australia I thought we had a rough first day, but I couldn't tell you how wrong that statement would be. We left the harbor thinking that the weather site would be right, however, it said we would have 10-15 knots of wind. Then we left and got winds of about 30-40 knots. Now any of you sailors out there would know that 40 knots of wind IS NOT FUN.  And of course since it is the Mediterranean the wind was right on our bow. So we went through 5-7 hours of this crap and eventually we decided that this sucked and went to a closer anchorage.


The next day wasn't as bad but it wasn't perfect, but we had to leave anyways. So we left and arrived to the spot we were headed for the first day and anchored right next to it. Now the spot that we were at then is a very special spot called the Corinth Canal, and if you don’t know what that is you should look it up. The Corinth Canal (in simplest terms) is a massive cut through the small piece of land between the middle and the bottom of Greece. Also the Corinth Canal was originally thought of by The Caesers. There we went through and then went to an anchorage near a historical place called Delphi.

Now you can probably guess where we went next but anyways we went to Delphi. Now Tutu (my Grandmother) would probably tell you a lot about the historic value of Delphi, but I’m just going to tell you the basics.


.
Delphi was where the Priest of Delphi lived and he/she could not speak correctly.  Was called the Oracle of Delphi.  At that day and age people were extremely religious and believed in almost anything a priest said about god. If you put some thought to it you would be able to figure that someone who couldn't speak right put was supposed to interpret their religion then the person who translates would hold all the power. So whatever that person wanted to happen would happen or whomever paid him got want they wanted to happen.


In the next place I talk of there is nothing historic that Ii know of but what happened to us was just too funny. It started raining one day and we just thought it was normal rain, but we were very wrong. After it rained we went out to go to town and then I said," Why is the boat red?" and then we all turned to look at it and well the boat was a reddish-orange color. Now after we went through the arduous task of cleaning the boat with salt water Tutu looked up what it might be. Well the weather site said that it was sand from the Sahara desert. Now of course your thinking what is the Sahara desert doing in Greece. Well I’m afraid I don't have an answer for you.


Now after we left Greece we wanted to head to Montenegro, but if you happen to have a map in front of you, you would see that we had the long coast of Albania to go through first. Since Albania was recently through a war and does not have much to see, we decided we would do our first overnight passage and go straight from Greece to Montenegro. During that overnight passage it was a full moon so we could play games as we watched.
But after that horrible moment of your laptop running out of battery and you just can’t take any more Game of Thrones you just sit there… sit there… and do nothing but watch. So after awhile of Tutu looking at me she said," Alright I’ve got a timer, it will go off after 15min. So go ahead and take a nap. So I did and guess what. She never woke me up! I woke up after we had passed through Albania and saw Montenegro for the first time. But I couldn’t believe it; she lied to me! But anyways that’s all I have to say about that.


This next thing is long after that O/N trip but I'll say it anyways. Tutu had planned a trip through a lot of Montenegro and of course we had to go. So we waited at the stop and a van pops up that barely held all of us but we went anyways. So during the trip the driver was making jokes so the time could go by and the awkward silence between everyone could slowly dissipate and all of us become friends. After awhile he succeeded and we became friends with 2 Australians and surprisingly a Mexican guy -- all of them living in a hostel.


At first we took several stops to get supplies for our 15 hour trip but after awhile we started stopping to take pictures of the the veiws of Montenegro's coast and of course the 2nd largest canyon in the world which is where our trip was based around. After about 3 hours of this we stopped at the first really interesting place. In this place priests sold honey and they sold this coffee that is very, very strong and grainy. Of course I had to try this coffee. But I mean this stuff is stronger than taking a swig of whisky. Also the cool thing about this place was that they powered themselves by harnessing the power of the waterfall that is right next to their church/monastery.

After that we headed to this historic bridge that was supposedly fought over by Germany and Montenegro in WW2. After that we ended our trip in one of the deepest lakes in the world -- Black Lake. We didn’t stay there long but it was very interesting just to look at it.


After our trip we came back to the city of Kotor.  Now Kotor was once controlled by the Venetians in the 1400's. At Kotor there was a very long and large wall covering all the mountainside that looked quite impressive for something so old. But that’s really all I have to say about that.  The Australian college guys who were on our canyon trip said it took them almost 3 hours to walk to the top of the wall and back down.  No thanks!

To finish off this long essay about my trip here it is about the short time we were in Croatia. The only interesting thing that we did in Croatia was go to their capital called Dubrovnik. We went to Dubrovnik on what was supposed to be a pretty day but of course that was wrong. So we had to end our trip early because of the rain, but I'll still talk about what happened while we were there.

After we got off the ferry and onto the port Elizabeth, my cousin who has been with me here, started doing her normal thing of," I’m hungry, or I want ice cream." So to start we found a suitable place to eat and ate there. But guess what, she didn’t like the place we chose so we had to listen to pouty Elizabeth, and sadly I can’t say I have seen many other forms of Elizabeth this summer. But anyways what we ate was pizza which is actually Montenegro's and Croatia’s like special thing, and not to offend you New Yorkers but their pizza is better. Afterwards we started walking down a long alleyway and found a Mexican Restaurant. All of us were sad we had pizza instead of Mexican food.

Also this alleyway was filled with birds that look like bats which was kind of interesting. After that we went to an ice cream shop and got ice cream because well we were all starting to get headaches, and you can probably guess from who. After that we walked around trying to find a phone shop but then it started raining and we had to leave.

That is the conclusion of all the interesting things that happened this summer in Greece, Montenegro, and Croatia.

Oh…a couple more things.  One afternoon a bad storm blew through with winds over 50 knots.  It was rough!  Papa got the anchor up so we could get out of the anchorage and out to open water to wait out the storm.  But somehow the rope on the dinghy got wrapped around the propeller of the outboard engine.  The dinghy had been tied to the back of the boat while we were anchored.  When Tutu started driving the boat after Papa got the anchor up, then the dinghy was dragged backwards.  It filled up with water and the gas tank was outside the dinghy floating upside down.
I helped Papa get the gas tank onto the deck of the boat and to tie another line to the dinghy so it wouldn’t float away.  After the storm passed we went back to our favorite spot in front of a hotel with wi-fi and we anchored again.  Then we had to get the gas from the tank that floated into a clean new tank because any water would ruin the engine.   Papa taught me the easy way to siphon.  That was the worst storm I have been in.

Also, one day this summer Papa put on his diving gear and went under the boat to check on everything down there.  After he was finished working, he had me come to the swim ladder and hold on.
Then he showed me how to breathe underwater using this thing called an octopus.  We only went down a few feet.  We did this about 6 times.  One time we stayed down several minutes.  It was fun.  Now I want to learn how to scuba dive.

Papa said I can learn when he gets the boat back to the Caribbean. 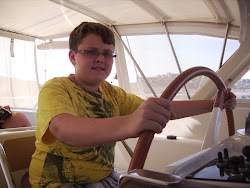